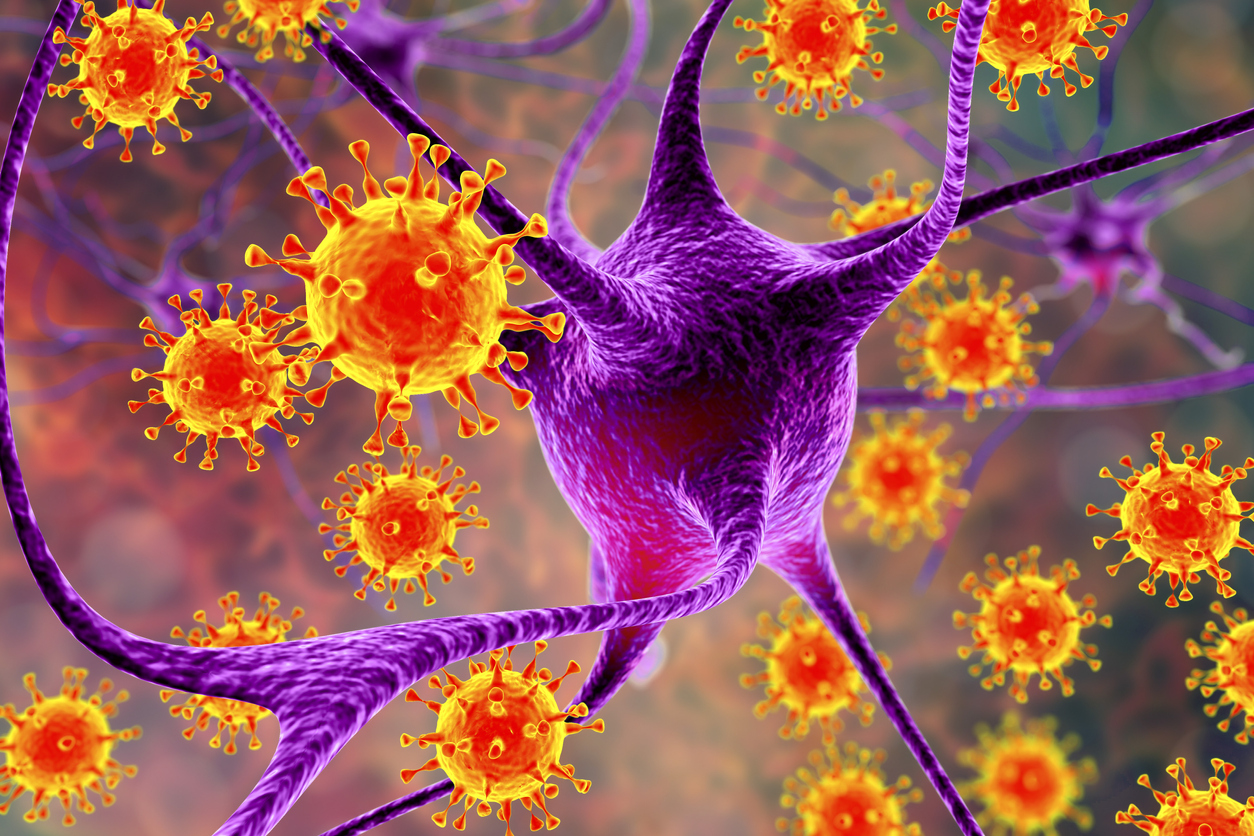 Epstein-Barr virus may be the predominant trigger of multiple sclerosis

A record-breaking study into the relationship between Epstein-Barr virus (EBV) infection and multiple sclerosis (MS) onset has revealed a 32-fold increase in the risk of MS after infection.1 This is the strongest evidence to date that EBV infection is the leading cause of MS onset.

A total of 2.8 million people are estimated to live with MS worldwide.2 While years of research have uncovered much about the immune dysregulation, neuronal degeneration, and symptomatology, the etiology of MS remains unknown. EBV, vitamin D deficiency, and smoking are among the most well-supported environmental risk factors.3

EBV persists in its hosts, establishing a latent infection in B-cells. Over 90% of the global population are infected by the human herpesvirus 4, most of whom contract it asymptomatically in childhood.3 Others are infected in adolescence or early adulthood, where it more commonly leads to infectious mononucleosis. A connection between EBV and MS has long been suspected, supported by various lines of evidence. For example, it has been shown that infectious mononucleosis increases the risk of MS development.4 Additionally, antibodies to EBV nuclear antigens are significantly higher in the serum of individuals who go on to develop MS compared to those who do not.5 It has also been shown that EBV-specific adoptive T-cell therapy has led to clinical improvements in patients with primary- and secondary-progressive MS in early phase trials.6 Furthermore, it is thought that the activity of B-cell depleting therapies, the greatest therapeutic development in MS in recent years, may be partially attributable to the removal of EBV, as by targeting memory B-cells they are hitting the primary reservoir of latent EBV.3

Despite numerous groups looking into this link for several years, causality has been difficult to establish, owing to the rarity of MS and the extremely high prevalence of EBV infection. Getting together a large enough cohort to establish if EBV-negative individuals are less likely to develop MS has been a challenge. Therefore, researchers at the Harvard T.H. Chan School of Public Health, Boston, MA, tested the hypothesis that MS is caused by EBV in an analysis of over 10 million young adults.

The large-scale investigation employed longitudinal data from routine biennial HIV screens collected from US military personnel over a period of 20 years and stored by the Department of Defence Serum Repository (DoDSR).1 Over 10 million individuals on active military duty between 1993 and 2013, corresponding to more than 62 million serum samples, were included in the study. The presence of anti-EBV antibodies was used to determine the EBV status of each participant. Fitting with the known prevalence of EBV infection in the general population, 5.3% were found to be EBV-negative at the time of first sampling. Analysis revealed 995 incident MS cases during the investigation period, of which 801 with adequate data could be matched to 1566 controls selected based on age, sex, race/ethnicity, and branch of military service.1 Of all these cases, only one individual tested EBV-negative in the last serum sample taken prior to MS symptom onset.

Causality can be difficult to prove outside the context of a randomized controlled trial. To demonstrate that EBV infection is a true causal agent in MS, confounding factors and reverse causation must be ruled out. The study investigators took several steps to accomplish this.

Investigators highlighted that the strength of the association radically reduces the possibility of confounding by known factors, explaining that any confounder would have to give a >60-fold increase in both EBV infection risk and MS risk to explain the 32-fold increase shown in the study.1 No known or suspected risk factors are that influential.

Based on the association data alone, it could be suggested that immune dysregulation during the preclinical phase of MS causes the increase in the risk of EBV infection. To assess this, a comprehensive search of the human antivirome response of 30 MS cases and 30 controls was conducted. Technology enabling the detection of antibodies raised against every peptide in the genomes of all human-infecting viruses showed similar responses in the case and control groups to all viruses, except for EBV.1 This suggests general infection susceptibility is not affected by immune changes in MS. Additionally, serum neurofilament light (sNfL) levels were assessed as a biomarker of neuroaxonal damage, thought to increase years prior to clinical MS onset. In EBV-negative individuals, sNfL levels at baseline were comparable between those who went on to develop MS and those who did not.1 However, levels were shown to increase following EBV infection.

What does this mean?

The data from this study not only shows that virtually all cases of MS are preceded by EBV infection, but also that the risk of MS increases substantially following infection, implicating EBV as the leading cause of MS.

Therefore, it is plausible that the development of an effective vaccine against EBV could eliminate most cases of MS. Vaccine trials are well underway: Moderna announced in January 2022 that human trials have begun.7 Indeed, to fully prove causality, it must be shown that preventing EBV prevents MS, and these trials may be an important next step in achieving this.

It is clear, however, that while seemingly necessary, EBV infection alone is not sufficient to cause MS, demonstrated by the many thousands of EBV-positive individuals who do not go on to develop the disease. The exact nature of how EBV infection causes MS and what other factors are involved, be they genetic or environmental, remains unclear.

AMT-130: the first gene therapy on the horizon for Huntington’s disease?

The first interim data has been published from a Phase I/II trial testing the safety and tolerability of AMT-130. If…

Myasthenia gravis (MG) is a rare disorder, exhibiting the archetypic traits of both the neuromuscular junction and autoantibody-mediated disease –…